The river is never the same
and neither are we.

The truth is
your honey nothing
is better than mine.

I love pancakes. I especially love the variety known as crepes – and crepes are even better when cooked Hungarian style as palacsinta.

Directions
1) Beat eggs into milk until blended (also add sugar/salt at this point). Pour the egg/milk mixture into the flour until fully blended into a smooth batter. The batter should rest for at least an hour.

2) When it is time to cook the crepes place a crepe pan to heat (or an 8-inch frying pan). While the pan is heating add the carbonated water to the batter and gently stir until just blended.

3) Add a bit of butter to heat in the hot pan and swirl to cover the bottom.

4) Pour a ladle of the batter into the pan and gently tip and twist the pan so that the batter covers the entire bottom of the pan. When the top of the batter bubbles, turn the pancake over and cook for 4 or 5 seconds longer. Remove the cooked palacsinta to a serving plate in a warm oven until ready to serve.
Continue until the batter is all cooked. Remember to add butter before cooking each palacsinta.

For savory palacsinta fill with cooked asparagus, ham and Havarti cheese…or some other dinner filling
For dessert palacsinta try plum jam OR cinnamon&sugar OR Nutella with strawberries….

Palacsinta can be served hot or cold. 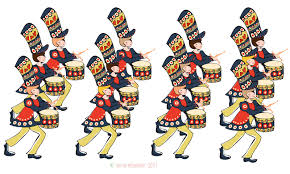 On the twelfth day of Christmas
My true love gave to me:
Twelve Drummer Drumming…

January 5th  is here and so this is the “Twelfth Day of Christmas.”  In the Christian calendar  this is listed as the traditional feast day for  St. Julian the Hospitaller. In the UK it is the feast day of St. Edward the Confessor (also known as King Edward the Confessor). A more modern Saint honoured on this day is St. John Neumann. That is a lot of saintliness for one day!

You can read the Wikipedia entries I have linked above so I won’t spend too much time on the details of their lives of these Saints. St. Julian the Hospitaller, the patron saint of travelers,  has an interesting myth associated with him where he is tricked into killing his parents. St. Edward, the patron saint of difficult marriages (yes before there was an App for there – that was a Saint for that…), was the only King of England to be canonized.

The modern saint of the day – St. John Neumann – was a Bishop of Philadelphia, living in a time when there was a rabid anti-catholic sentiment in the USA. Feelings were so strong that there were burnings of Catholic Churches, schools and seminaries.  It is a fascinating parallel to the strong feelings currently sweeping through the USA – especially related to “non-Christians”. Politically this lead to the Know Nothing movement and included the 1852 American Party which reads like an ancestor of the Tea Party movement. Its main platform was opposition to all foreigners (especially non-Protestants), and its motto was “Americans must rule America.” The more things change the more they stay the same!

Now that has very little to do with Christmas as a celebration  – but it sure is a fascinating glimpse into the evolution of US politics and world social movements.

In the secular traditions of Christmas this is Twelfth Day, and tonight then is Twelfth Night. Most of us know the the Twelfth Night as a play be Willaim Shakespeare. The title of Twelfth Night refers to the magic that flows into the world during Christmastide, as the old order of the world is over-turned by the coming of  Christ. The play itself reflects the Carnivalesque atmosphere of Yuletide – where things are reversed and confused and involves cross-dressing, switching of roles (master becomes servant – servant is master). Christmastide reflects the essential fact that Christianity has rather rebellious roots at its foundation.  A virgin has a child – and that child is the divine become human. The barrier between heaven and earth is breached and will never be the same.

Twelfth Night as the Eve of the Epiphany, and as a Christmas tradition, is a day of celebration and carousing. It is a festive occasion marked by merrymaking, feasting and drinking. The wassail punch of the song “Here We Come a Wassailing” is an important part of the English tradition for Twelfth Night. The carol itself has become associated with Christmas Eve, however more traditionally it was part of Twelfth Night celebrations.  This is a night for singing, dancing, drinking and celebrating.

The modern Twelfth Night is now the traditional time for Christmas decorations to be removed and put away. Any edible decorations are distributed and eaten. My parents would have colorfully wrapped marzipan on our Christmas tree – and any we hadn’t already consumed would be eaten that night. My mother always pretended surprise at the many wrappers stuffed with tissue – the delightful marzipan somehow transmuted into paper.

In the Christian context, Twelfth Night is celebrating the Eve of the Epiphany. The Feast of the Epiphany on January 6th is the day the three wise men arrive and the “manifestation” of god as human within the infant Jesus. This is part of the “upside-down” nature of Christmastide. On Christmas eve, the birth of Jesus is revealed to the animals in the stable, and then announced to the ordinary people first – “shepherds watching their flocks by night.” The elite of the world must wait until later for the revelation of the manifestation of god. With the appearance of the three wise-men and their gifts worthy of  a King bestowed the promise of Christmas is delivered into the world.

Since the actual day of the Epiphany is a joyous and solemn event  – Twelfth Night is then a chance to revel in the unfettered  merriment of Christmastide one last time. Perhaps having a hang-over makes for quiet worship the next day.

So on this Twelfth Night – eat, drink and be merry!

On the eleventh day of Christmas
My true love gave to me:
Eleven Pipers Piping…

January 4th  is here and so this is the “Eleventh Day of Christmas.”  In the Christian Christmas tradition this is the octave day for the feast of the Holy Innocents. The saint venerated today is St. Elizabeth Ann Seton, the first American saint.

In reading the Wikipedia entry on Elizabeth Ann Senton it seems she was a woman who encountered many difficulties and tragedies through her life, and through her faith she was able to overcome that adversity. She was born into a family of standing and so had access to an education, and to resources to assist her in her struggles. Still she could have simply withdrawn from the world and avoided the world – instead she used her standing, and resources to improve education. This is why she is considered the patron saint of Catholic Schools in the United States.

As the major feast is the last day of the octave for the Feast of Holy Innocents – it is strangely fitting that the Saint of the day be considered a guardian of schools. While much of the Christmas season is focused on joy and celebration, the secondary themes of tragedy and sorrow are also part of the Christmas tapestry. The Feast of the Holy Innocents is not a prominent part of our current cultural experience – yet with the horrible memory of the shooting at Sandy Hook and in Peshawar, Pakistan still fresh in our minds it now seems that this is part of the season we need to remember.

There is no standard music specific to this day, and the carols and hymns of the previous days are still part of the rituals of tradition. Since the Eleventh day of Christmas has Pipers Piping I think I will find a nice bit of pipe music.

According to the National Days listings for the US – today is National Spaghetti Day. A nice big bowl of pasta seems appropriate. I like mine with a meat sauce – and lots of fresh grated Parmigiano-Reggiano cheese. Mmmm.

And now I think I need a drink – so here is a drink for the eleventh day of Christmas involving scotch (in honour of pipers of course!). It is more complicated than I would might make – usually I just skip straight to the scotch.